Our goal is to better understand the realities of being justice-involved based on lived experience of our clients.

Our work in justice uses a harm-reduction and social determinants of health lens to enhance our understanding of the factors that contribute to people getting caught in the justice system.

We believe change will occur if the whole community comes to the table. Gaining a better understanding of how people can get caught in the Revolving Door of the Justice System, is the first step in raising community awareness and creating meaningful change.

A healthier community is one in which people who are involved in the justice system are provided with opportunities to heal, explore their spirituality, receive case management support services, and have access to counselling and systems navigation.

The Revolving Door of the Justice System infographic is a tool to better understand the realities of being caught in the justice system and highlight gaps in service. Infographic content was developed based on conversations with our members, research, and observation. 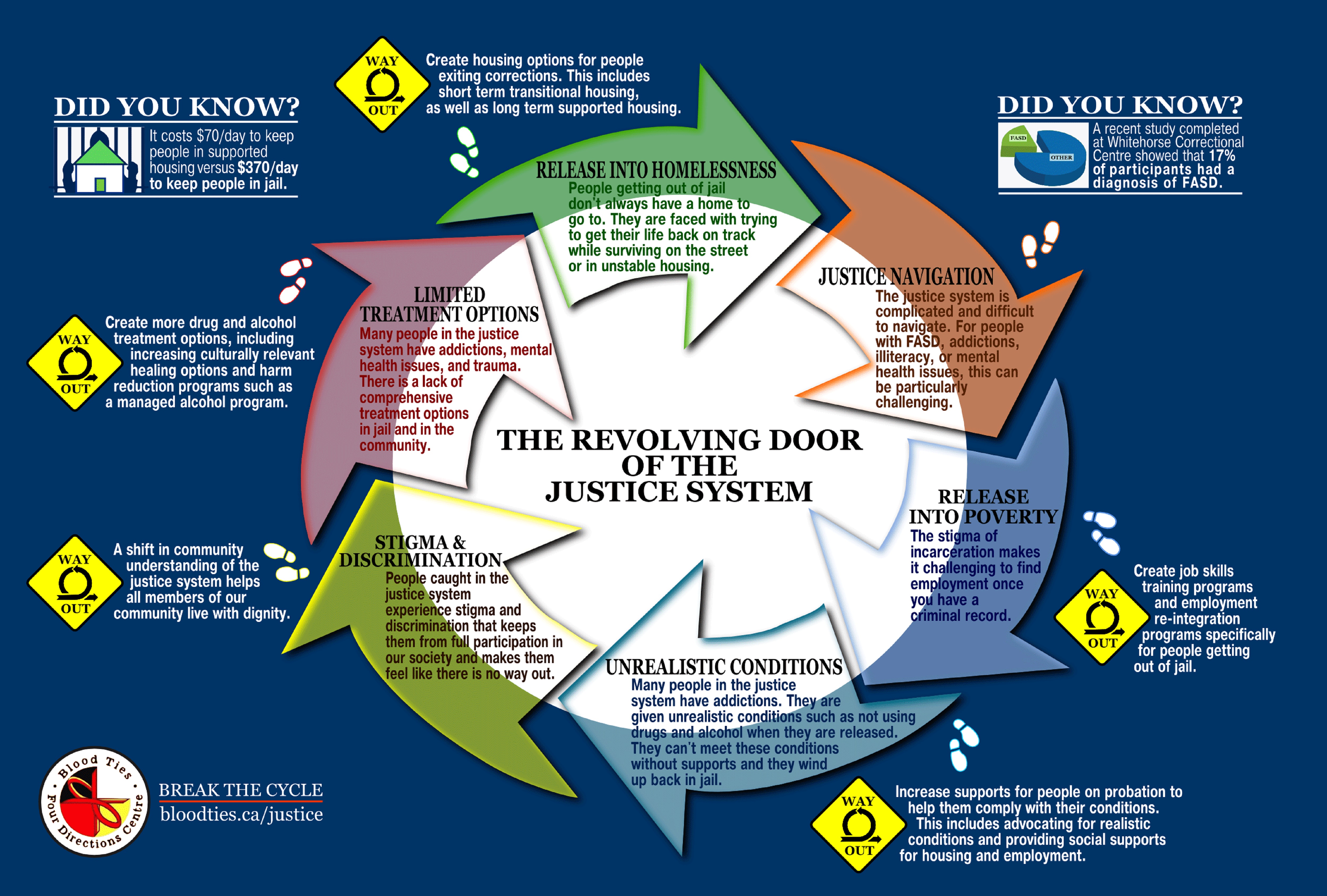 In summer and fall of 2016, we built on our Revolving Door of the Justice System infographic developed the year before. We produced the booklet: The Revolving Door of the Justice System Booklet The booklet featured personal narratives of how people have been caught in the system with no way out. The cycle of poverty, homelessness, addiction, and trauma have affected many of our clients and are intricately linked to their justice involvement. The booklet was distributed broadly across the Yukon and Northwest Territories. In April 2016, the project was presented at Indigenous Thought and Well-Being conference in St. Paul Alberta.

Here are some excerpts from this powerful and moving booklet:

“My experiences as a kid shaped me. I grew up in a secure juvenile facility in Vancouver, from 13 to 18 years old. When I was there, I got more violent. I left tough, angry, mean, and pissed at the world. It followed me my whole life. I am still like that. I want to change, but I’m not ready and don’t know when I will be ready.” Male, 43

“I’ve been involved with the justice system since I was 12 or 13 years old. I think for me, dealing with the RCMP on the front lines, I believe they taught me how to fight because I have been beat up so many times. When I was younger, my mom would pick me up and I would be covered in bruises. I’ve dealt with racist cops in Edmonton and in Whitehorse. In Edmonton, they threatened to take me out of city limits to strip me down and beat me. At that age, I was scared of them because they would beat me. After a while, I started fighting back. So when cops get called they were mostly men, rarely women, and I would fight till the bitter end until I was put into a cell. That ignorance, racism, and abuse of power is where I think a lot of my hate came from.” Female, 31

“When you are in the system, there are people that care and want to try, and they do try. They are good people. These are workers exist, but their hands are tied within policies and practices. Those people have good ideas and show that they care, but they get overwhelmed, like we do. It seems like most of the decisions are made by people who aren’t there at the front lines.” Male, 53

Download and Read the full booklet here: The Revolving Door of the Justice System Booklet 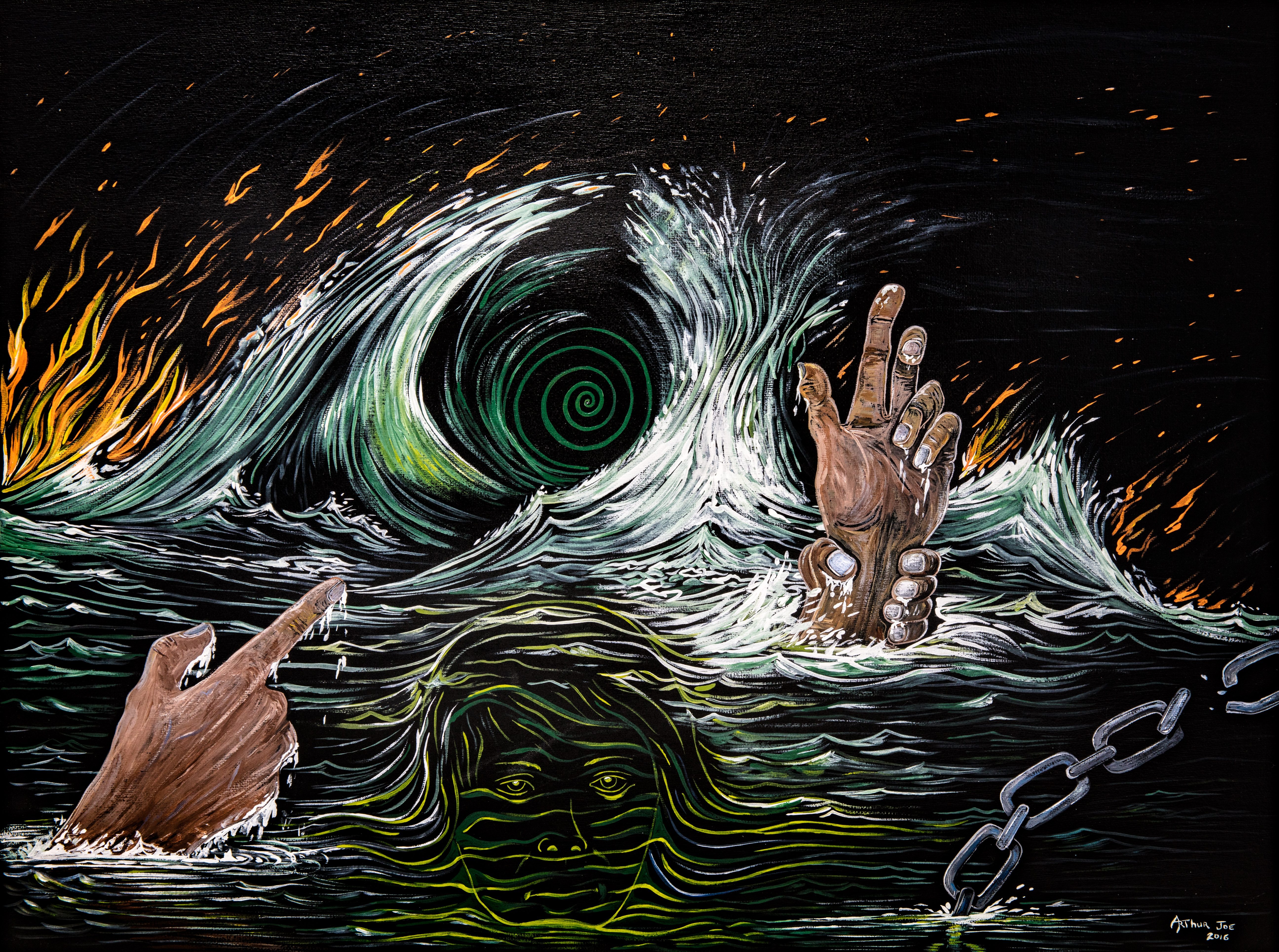 Artwork for booklet by Arthur Joe